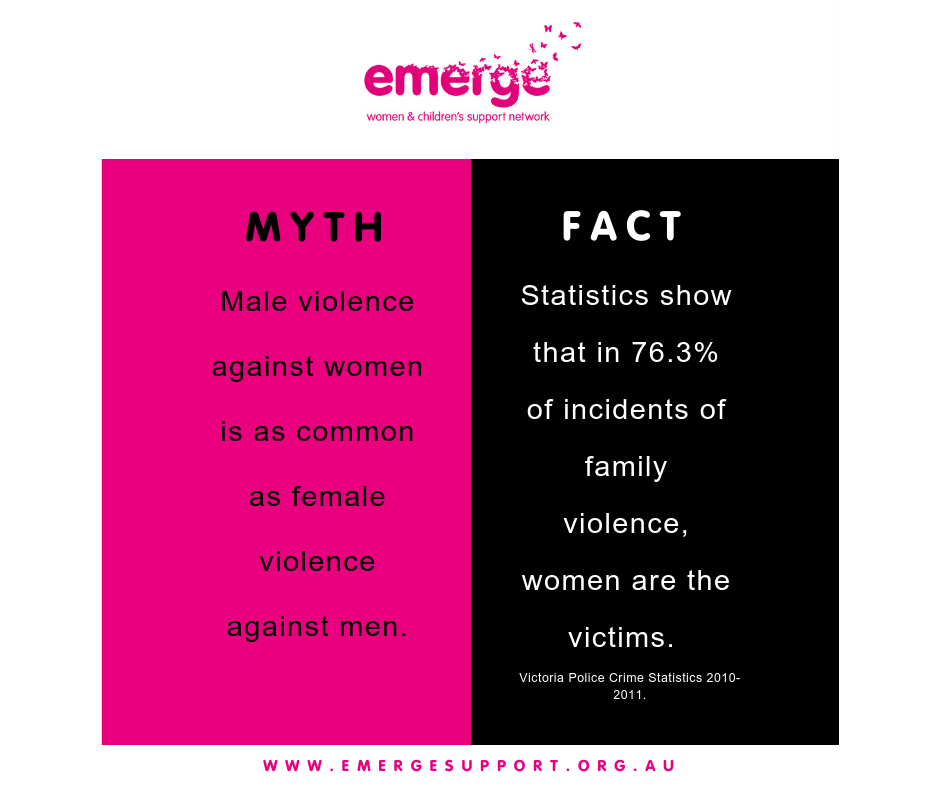 “The myths and misunderstandings that surround family violence hold us back from ending this problem” Paula Westhead, Emerge’s Executive Office says.

According to Paula, survivors’ stories help to unravel some of the misunderstandings.

One myth is that violent men are ‘monsters’ and cannot control themselves, yet violent men can appear loving and caring and are often not violent in other situations.

“We recently supported Eboni who told us about her partner Carlos. Apparently, he was a seemingly charming and sensitive man who soon became highly controlling, abusive and threatening. Carlos always had excuses. He claimed that if the family moved to WA, he could buy a Harley and become happier. The family did, but things only got worse,” Paula said.

Myth: Alcohol and drugs cause men to become abusive.
Reality: Drink or drugs may trigger a violent episode, but sober men can also be violent. Blaming drink or drugs is simply a way of excusing or justifying unacceptable abusive behaviour.

Myth: Family violence doesn’t happen in middle class families.
Reality: Family and family violence occurs in all sections of our community, across all cultures and in all types of relationships.

Myth: If a woman doesn’t like it, she can leave.
Reality: It’s not that simple. Studies have shown that a woman will try to leave up to seven times before making the final break. Many women have no money, nowhere to go, feel ashamed, and fear the consequences for themselves and their dependents. Some believe their partner will change. Research also shows that attempting to leave an abusive relationship can cause the violence to escalate.

Myth: Women who are victims of family violence provoke it or bring it on themselves.
Reality: Family violence is a crime. Violence and intimidation are never acceptable ways of solving conflict in a relationship.

Myth: Violent men are ‘monsters’ and cannot control themselves.
Reality: Violent men are capable of being charming and loving. They are often not violent elsewhere, in other situations, or to others.

“We need more people to understand the reality of family violence so that we can take steps towards solving this epidemic,” Paula said.