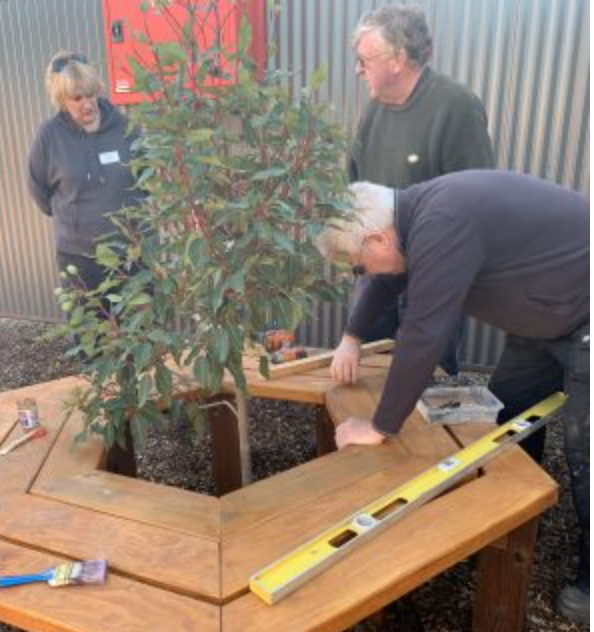 The playground at Emerge’s 24/7 refuge is turning green thanks to the support of Mordialloc Rotary and Mordialloc Men’s Shed.

In between the 2021 COVID-19 lockdowns the groups have been visiting the refuge to help with the creation of a sensory garden, planting a shade tree and other plants in the playground and place seating around the shade tree.

Dianne Taranto, the current chair of Mordialloc Rotary’s youth committee, said the club was delighted to be working with Emerge on such an important project.

“We first became involved with Emerge in 2015 when we were approached to provide playground equipment for the old refuge.  With the new refuge in place, Emerge approached us for help to install a sensory garden for the children. It was an offer we could not refuse.”

Dianne said that supporting Emerge ties nicely in with Rotary’s commitment to ‘Putting an end to Domestic Violence.’ The Rotary movement has long recognised the desperate need for family violence services in their communities and fundraise and partner with other charities to raise awareness and work on prevention and survivor support.

The club is now waiting for the current lockdown to end before returning to the refuge to install and electric BBQ and shade cloth in the garden. The Men’s Shed also plan to make and instal picnic tables and more bench seating.

“We have many more plans including to plant several trees in the back area of the complex and build and install several vegetable boxes and a worm/composting area,” Dianne said.

She says for many children, time spent in outdoor play has been declining in recent years.

Emerge staff have noticed that children who have a ‘nature rich’ life have far higher empathy, responding with distress and concern to the pain of others.

“They also feel good about caring for the environment, for example, by watering a dry garden, have greater appreciation for nature and more desire to go out and play in natural settings.”