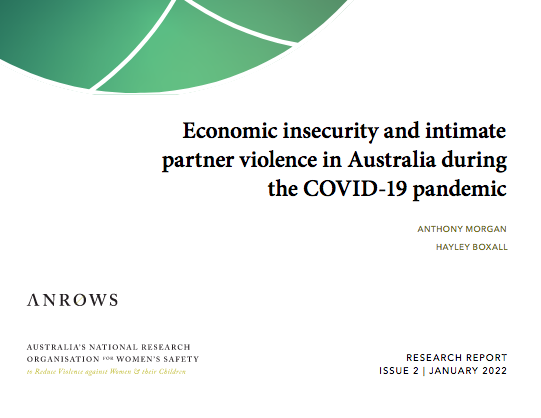 According to research by Australia’s National Research Organisation for Women’s Safety (ANROWS), women experiencing financial hardship or stress because of the pandemic are up to three times more likely to be sexually or physically abused by their partners.

The researchers surveyed 10,000 women to investigate links between economic insecurity and intimate partner violence during the Covid-19 pandemic. It found “clear evidence” that economic stressors were associated with both the onset and the escalation of abuse.

The research found that female breadwinners were also more likely to experience abuse, as well as women whose partners had not previously been violent to them, suggesting the financial stress contributed to the violence, as opposed to stress being the consequence of the abusive relationship.

The authors, Anthony Morgan and Dr Hayley Boxall, from the Australian Institute of Criminology (AIC), found one in three women surveyed suffered at least one form of economic hardship (defined as an “inability to pay for essential household expenses because of a shortage of money”) during the pandemic.

“While most women coming to Emerge are not employed in the workforce, their reality is that over the past two years, financial pressures have led to escalating violence,” Paula Westhead, Executive Officer, said.

Emerge has noticed an increasing number of women reporting former joint accounts were closed with money transferred to the partner’s own account and utilities’ statements being revised to the woman’s name.

“When men have the economic power, women’s dependence is a barrier to leaving an abusive relationship or seeking help,” Paula said.

According to the survey results, women experiencing high financial stress were three times as likely to experience physical or sexual abuse and 2.6 times more likely to experience non-physical abuse. The researchers found there was an increased risk for women with health conditions, or who’d been pregnant in the past year, or living with children, or Indigenous women.